This is my first post about cryptography. Recently I learnt basics about public key encryption and the TLS handshake. But the key exhange in the TLS handshake inspected by Wireshark, i.e. ECDH(Elliptic-curve Diffie–Hellman) troubled me for a while. This this the first time I knew Elliptic curve. After some investigation, I’m recording those knowledges in case that I forget them.

Note: in the following several posts, I would record more things I learnt about cryptography and its application in the computer network and Internet.

A elliptic curve could be defined as: 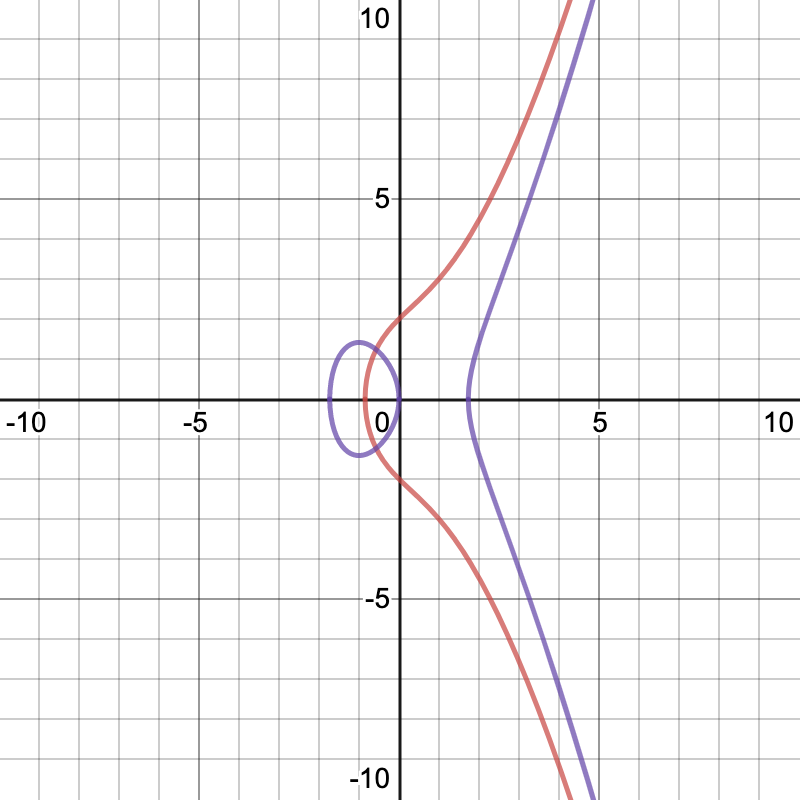 A group is a Abelian group if the follwoing condition is also met:

commutation: for any and in , there is

Aparently the set of all real numbers could be an Abelian group with the arithmetic adding operation.

A finite group is a group with limited elements. For any element in a group , if you repeatly add to itself, you would get . I.e. there is a number such that .

Why? Lets say the group has elements, then the list would have same elements in it. Assume they are , then you see .

Define group on the elliptic curves

First, the set consists of all points in a elliptic curve.

The Identity element would be a little special, it’s defined as the infinitely far points of the curve.

Now, lets define the operation. For any points and in the curve:

From the 3rd and 4th cases above, we know the relation between and , would be like: 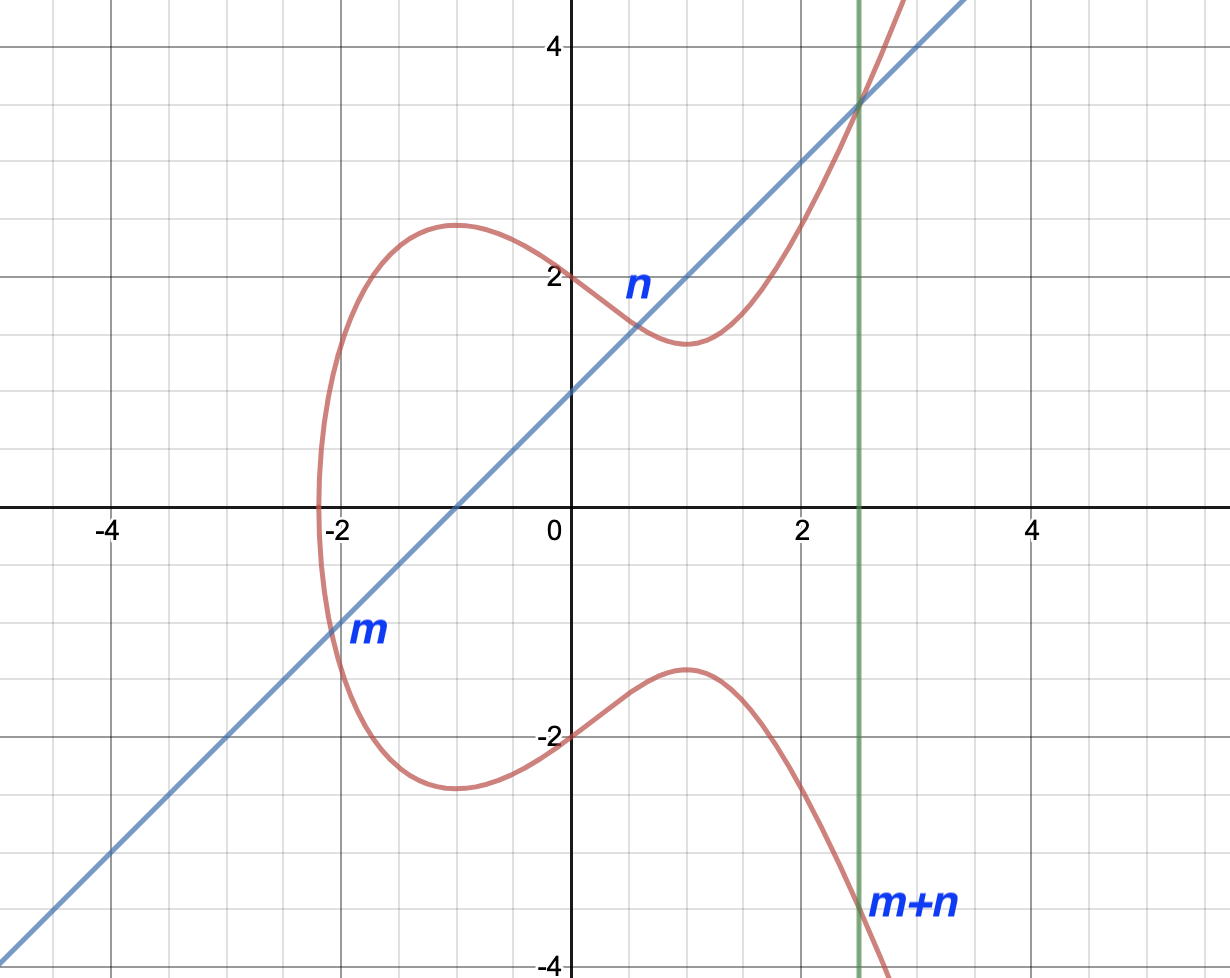 It can be proved that such a group is an Abelian group.

We can also defin a scalar multiplication based on the plus operation upon the elliptic curve groups:

where is a positive integer and is a element in the group.

The above expression could be calculated in time complexity of by disassembling the into factors that are powers of 2.

In last section, we see given and , it’s easy to get . However, given the and result of , with some cleverly constructed instances it would be very hard to know the value of , i.e. the times of operation performed to get the . And this hard problem is called logrithm problem.

An Abelian Group is a Ring if multiplication denoted as could also be defined and:

A Field) is a commutative ring which also satisfies:

For a prime , the set of integers from 0 to could be a field. And the addition and multiplication are defined as:

Besides, assume the number 0 and 1 are and respectively. Then apparently is since:

Previously the elliptic curves consist of points with coordinates of real numbers. But now we restrict the curve upon a finite field which only contains integers betwen 0 and .

Here is an example graph of : 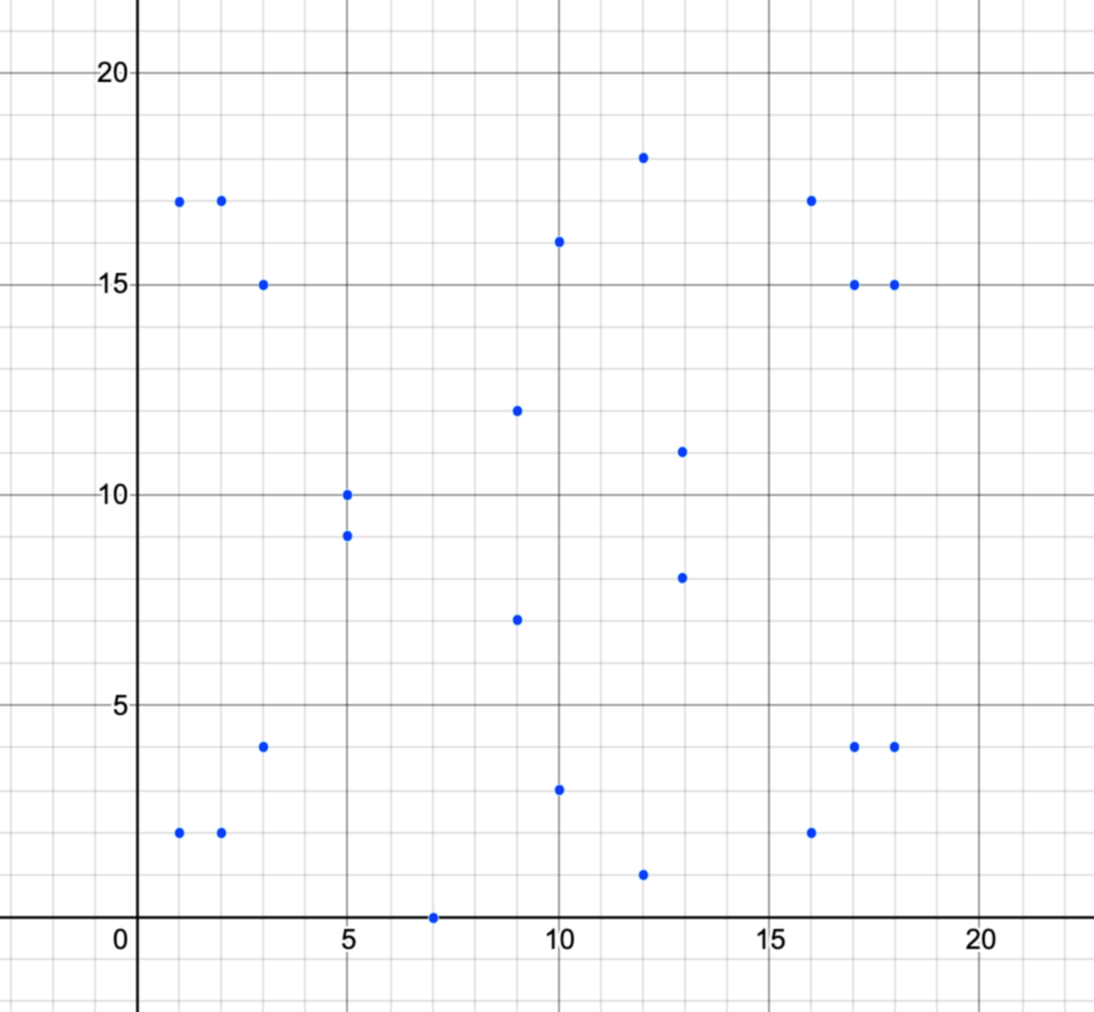 Note that most of the points in the above graph are symmetrical over the line except the points on line .

Group on the elliptic curve over finite fields

The identity element is same as before. The reverse pair of elements are symmectircal over the line .

when one of the lines cross and , and , and are inetger constants.

The following is an example, where the discrete elliptic curve equation is , and the lines equation is : 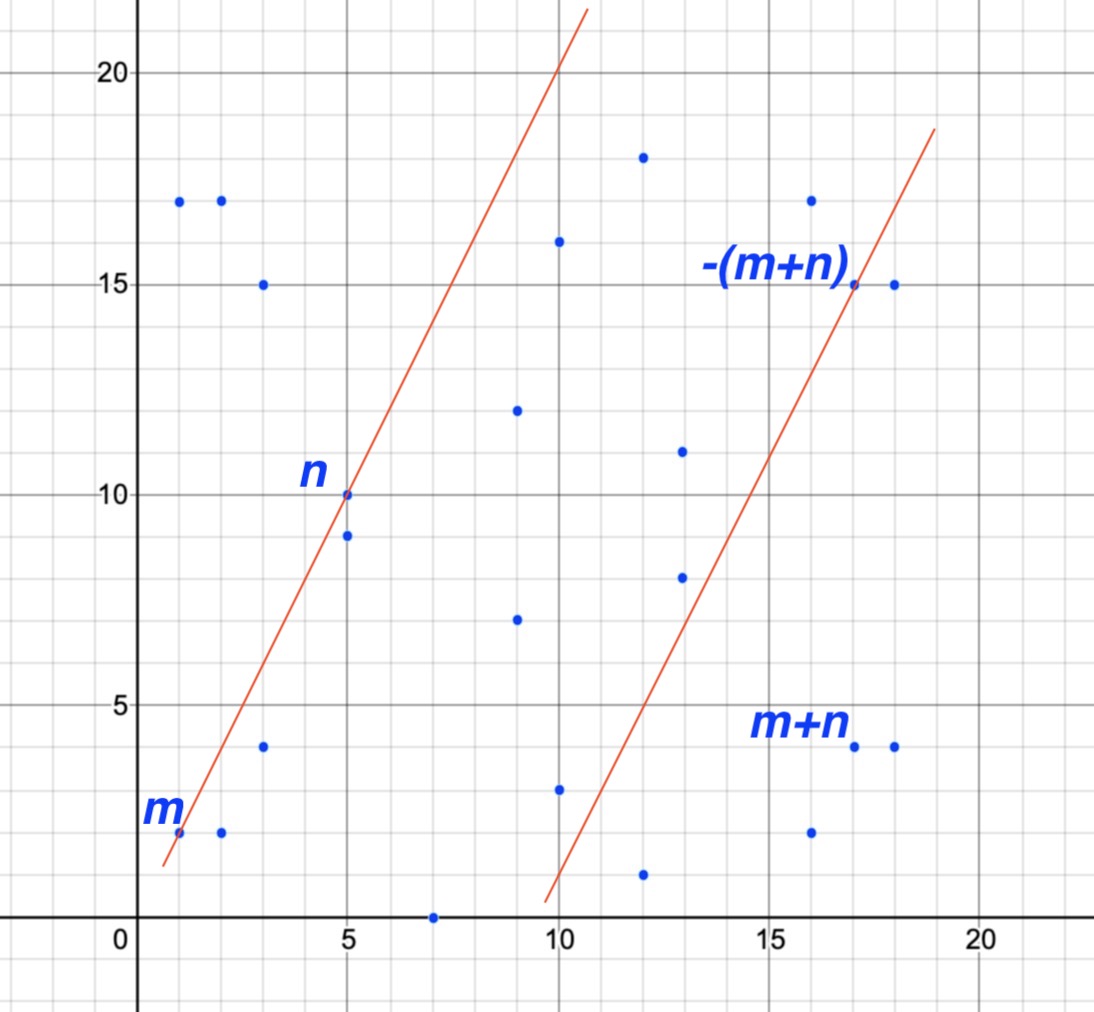 In above diagram, and are and respectively, while is . So this is a general example, how about when is just ? What’s the is this group?

When is just , we can also get the tangent line whose slope value is the derivative of the elliptic curve equation at the point .

It could be proved with such a plus operation defined, a group is generated on the discrete elliptic curve over a finite field from prime .

where is a positive integer and is an element in the group.

Let’s say the order of the parent group is . According to Lagrange’s theorem), the order of a subgroup is a diviser of .

As an example, lets use the and assum3 is . It could be calculated that are . Show as below: 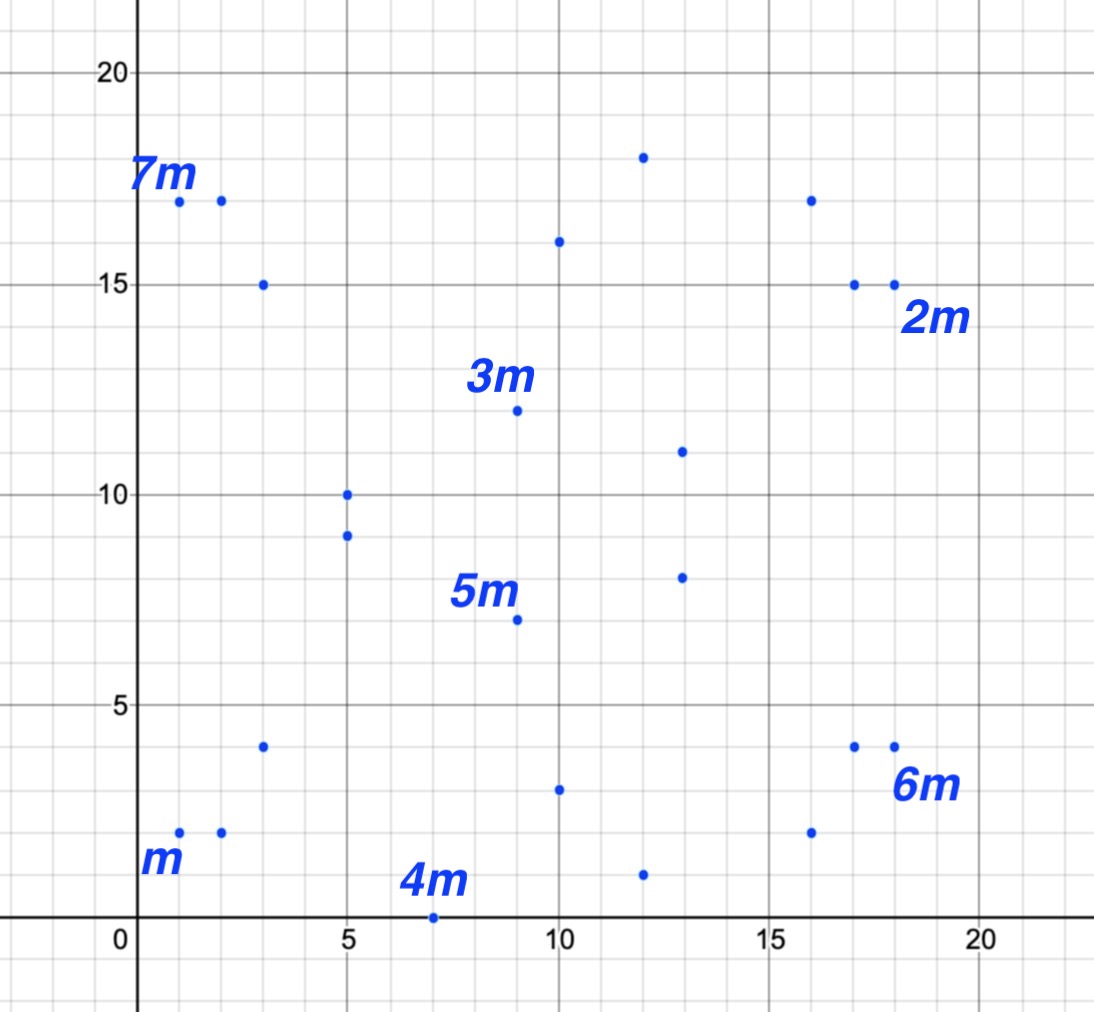 In above diagram, the order of the parent group is 24. The order of the subgroup is 8, which is a diviser of 24. Also for the point , its inverse point is itself (actually the slope value here is infinity).

Note that different subgroups might share points. For instance, in the above example any subgroup whose base point is order is an even number , then is the point .

Hence for any in the parent group, we can check the divisers of one by one to find out the order of subgroup based on .

On the contrary, for any prime diviser of , any element point such that not equal the is the base point to form a subgroup whose order is . (Hint: is always the .)

Given and in such a group G, getting a such that is also very hard for some instances of discrete elliptic curve, just like the logrithm problem we mentioned previously.

In the Elliptic curve cryptography, The private key is a random number such that . The public key is the result of .

The EC Diffie-Hellman key exchange is based on that given the domain parameters, it’s hard to know given and , and same for and .

While the original Diffie-Hellman key exchange algorithm is based on exponential modular. Assume is a prime and is a primitive root modulo and both of them are public. Private keys are random numbers and , public keys are and , and the secret key for symmectric encryption is .

The shared secret key in EC Diffie-Hellman key exchange algorithm are coordinates of the point , which could be used to perform symmectirc encryption just like TLS does.

Actually in TLS, we often see ECDHE in which the ending E means ephemeral which means the shared secret key is temporary. Actually when TLS uses ECDHE, during the handshake procedure, the public and private keys generated in ECDHE won’t be used for encryption. TLS just want both sides to generate a shared private symmectric encryption key, which is really for encryption of application data.