Everyone knows HTTP is in plaintext and unsecure, and HTTPS is more secure. Just as the lock icon in Chrome address bar shows:

But why is that? Just because of encryption? The reality could be more complicated, yet more interesting. Let’s go!

What is secure communication

First, we should abstractly specify what is secure communication (typically secure remote communication). Assume Alice (A) and Bob (B) are two characters to communicate remotely, and the meanful contents they send or receive are called messages.

There are 3 essential conditions of secure communication

Only the A and B should be able to understand the contents of the transmitted messages. Aparently encryption and decryption are necessary.

Ensure that the messages are not altered, either maliciously or by accident. Digest algorithms (explained laterly) is necessary for integrity.

The Internet is built with numerous routers, switchers, hosts and other devices. Data sent from our PCs or phones would go through so many transit devices, but the hardwares of the Internet doesn’t provide secure communication. Some security protocols in network layer or below layers are also unreliable since they’re implemented in routers or switchers.

Symmectric Encryption is symmectric because A and B use same secret key to encrypt and decrypt the messages: 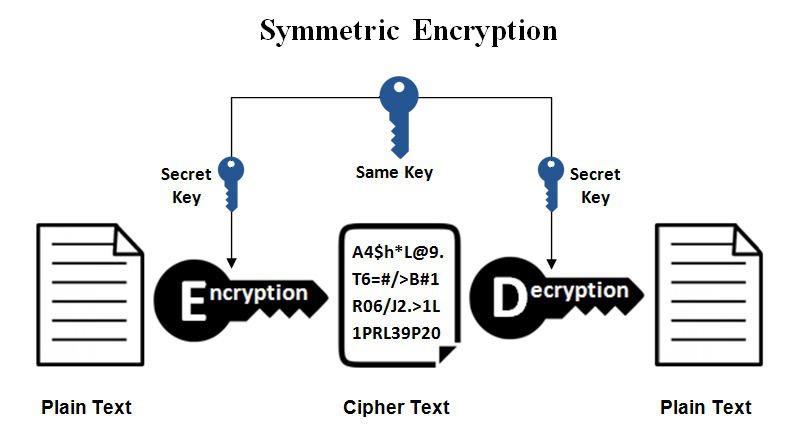 The biggest inconvenience of symmetric is that A must hand over the secret key to B before any communication, and this is hard for remote communication. In wars, we often see codebooks must be carried to frontlines safely. 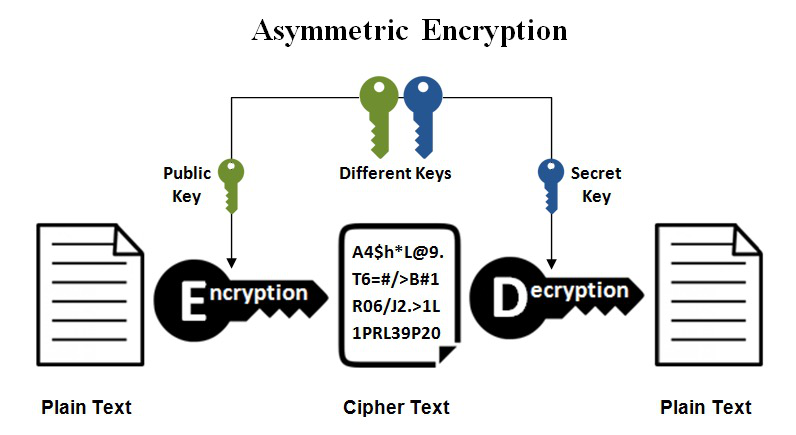 The most famous asymmetric encryptions are the RSA algorithm and Elliptic curve algorithm. Asymmetric Encryption fulfill the following conditions:

The concrete steps of the RSA algorithm:

With given , calculate the large primes and is hard, that’s why RSA is safe.

With 1st of the above facts, there is , then there is:

With asymmetric encryption, A and B publically publish their public keys. A could encrypt messages by using B’s public key before send them to B. After receive A’s encrypted message, B could decrypt the encrypted messages to get the original contents: 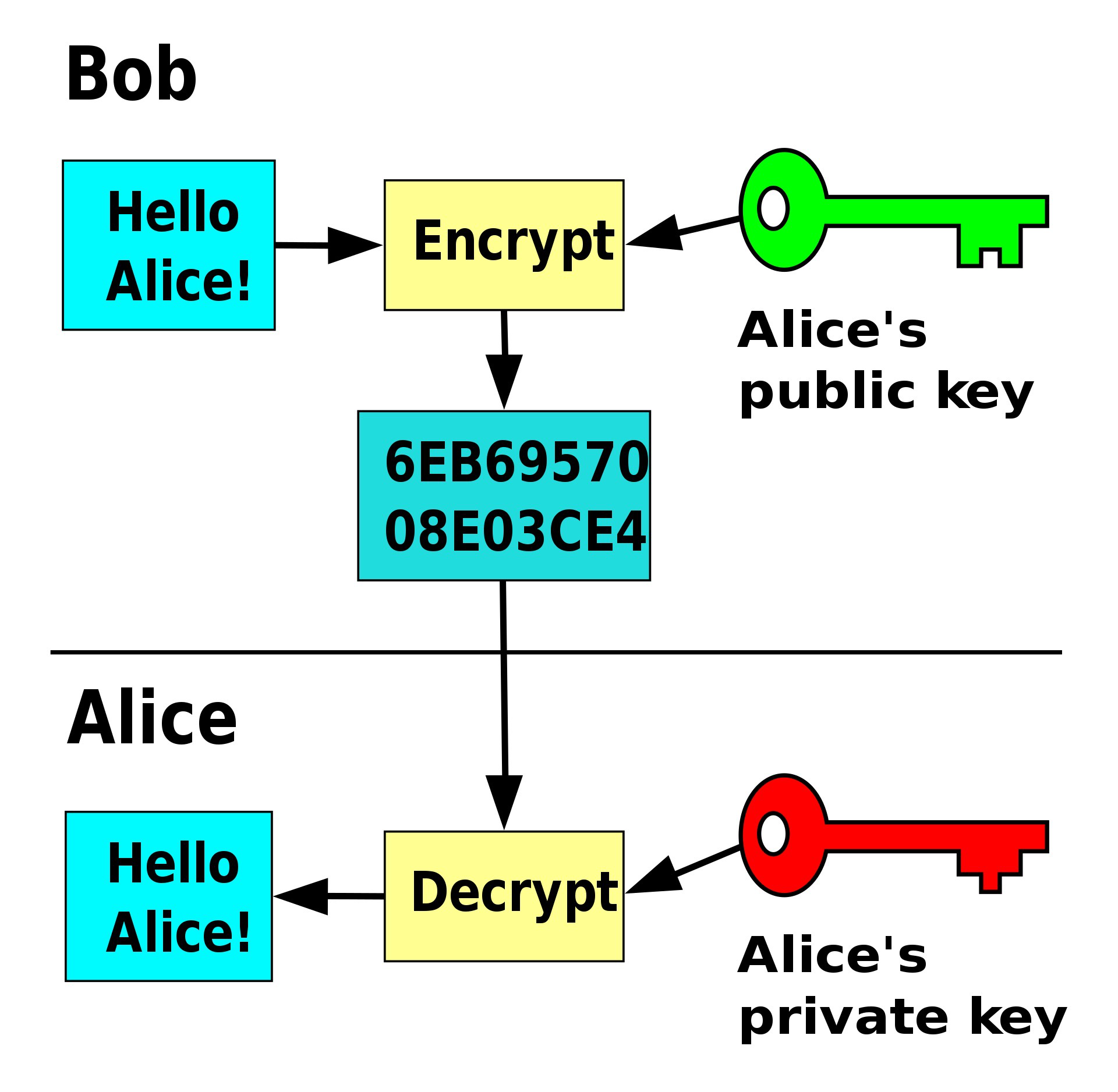 Except A and B, no one could decrypt the encrypted messages as long as their private keys are safe. Seems perfect! However, there’re man in the middle attacks!

Aparently, the critical point to avoid the MITM (man in the middle) attack is making sure the public key exchange cound’t be tampered. In real world, certificates and certificate authority (CA) are invented to solve this.

Pros and cons of Asymmetric and Symmetric

Symmetric: simple and fast, a shared secret key need to be transitted..

In real Internet, they’re working together in HTTPS.

Besides, digital signature was based on asymmetric encryption.

A good digest algorithm fulfills that, for any input , it’s hard to find another input such that digest of is same as . 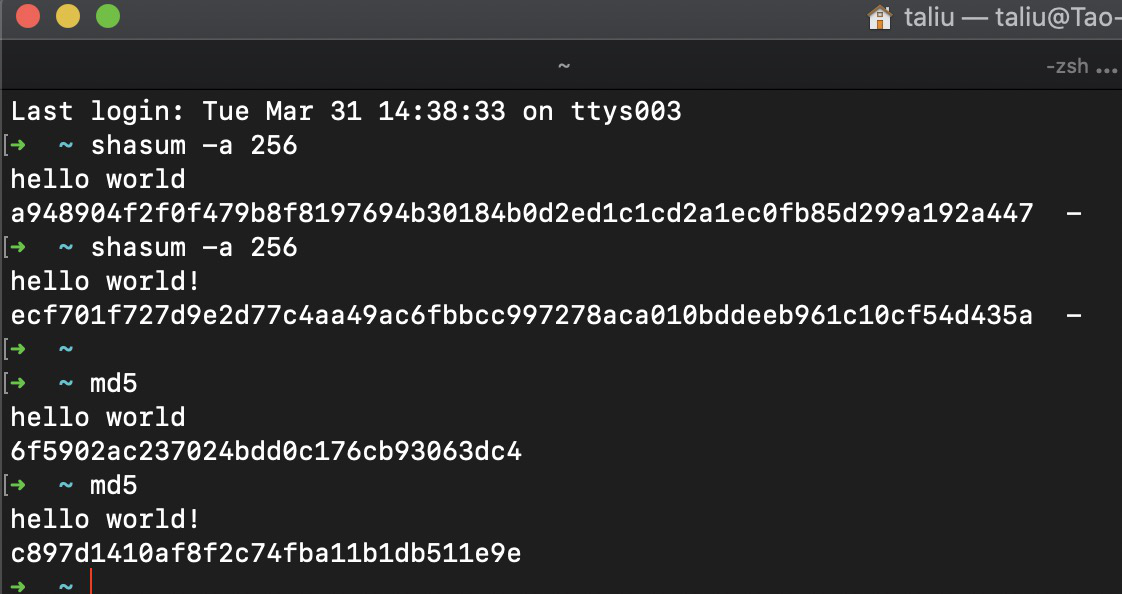 Digest is also used to verify the integrity of large file you downloaded form Internet.

Signature should be verifiable and nonforgeable.

A real world signature, to some extent, can prove that someone certified a document, on condition that no one can imitate handwriting of others. 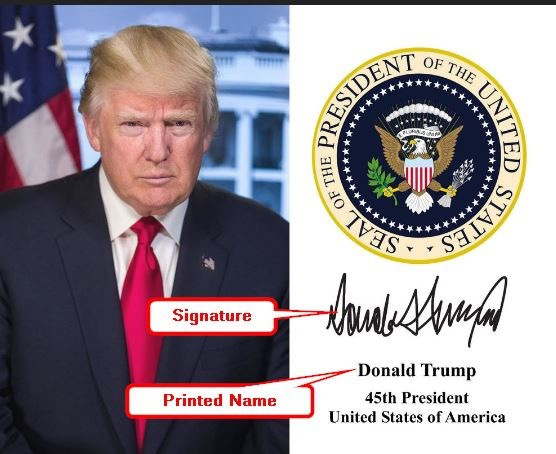 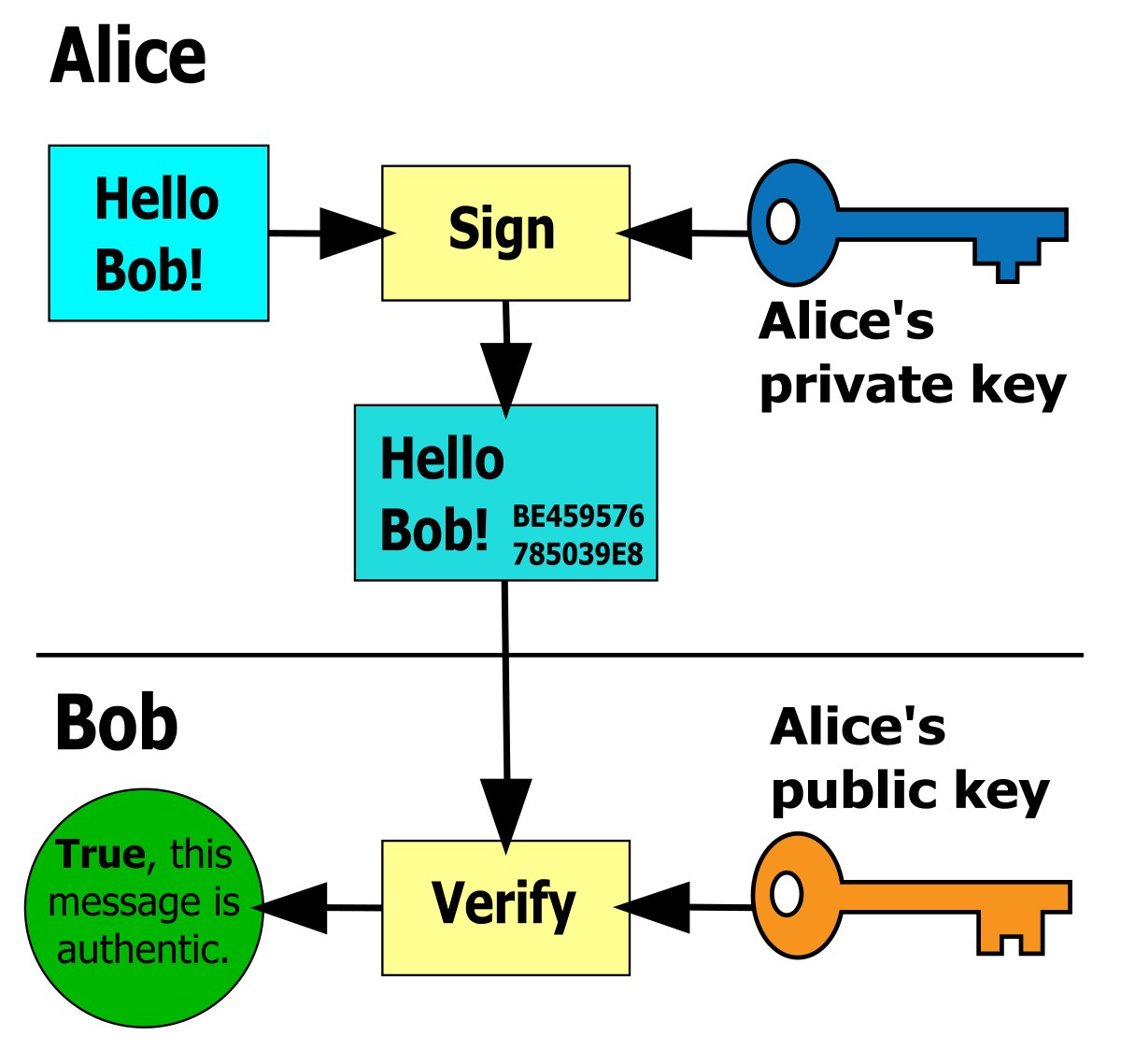 Anyone holds your real public key can verify the digital signature, and no one can forge your signature.

Let’s look at the real world network communication. There are numerous servers, yet there are more clients like our PCs and phones. Certificates would help us (clients) to get the real public keys of servers, and confirm the identify of a server.

Certificates are public, encoded in X.509 format, and contain (but not only) the following information:

An example of certificate owned by wikipedia: 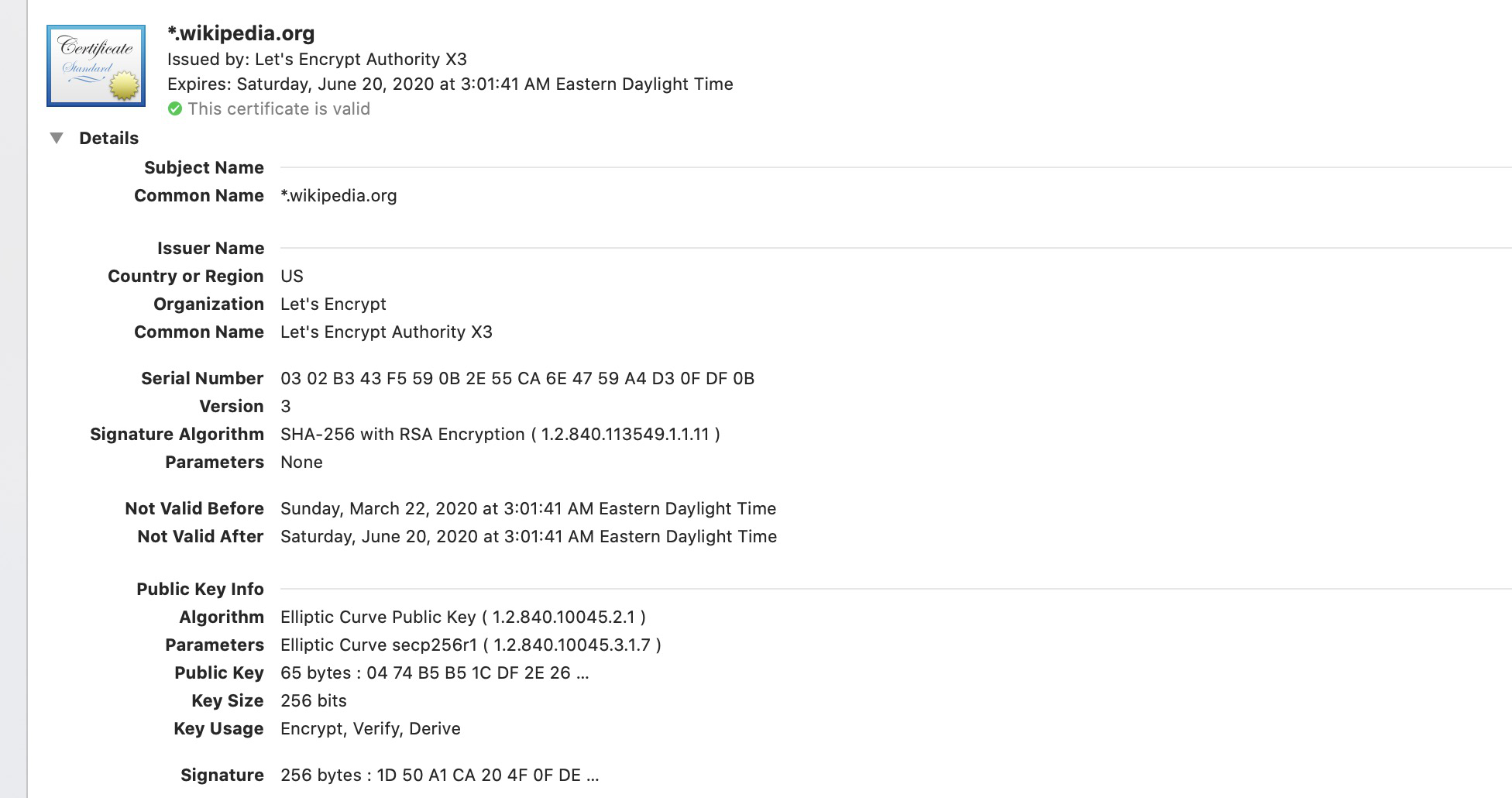 In the world, there are some entities called certificate authorities (CAs), they issue certificates to other servers. Meanwhile they also own their certificates.

Root certificates are powerful because many of them are embedded in our client devices when they were made in factory (we can also install certificates to our devices, i.e. trust the installed certificates). Thus when a client communicates with a root CA, the client can confirm identity of the server by requesting digital signature of random message from the server.

But how about ordinary servers? How to identify them? Certificate chains would help us. 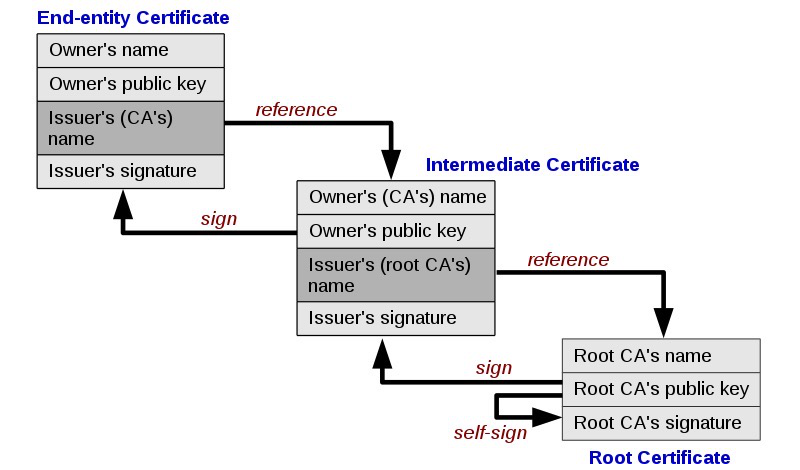 A screenshot of real certificate chain: 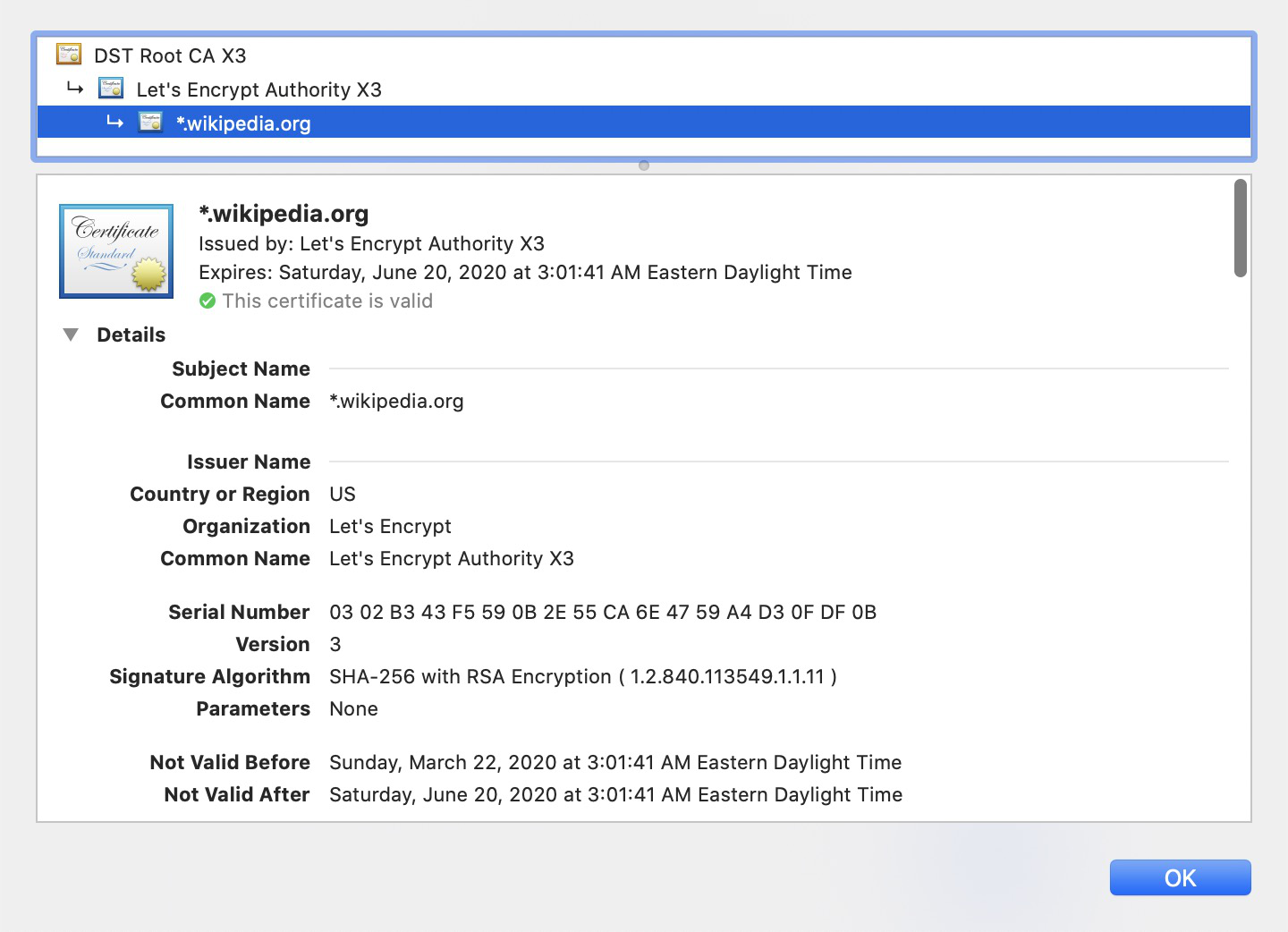 But verifying the certificate chain is not enough. Furthuremore, the client could request a signature of random message from the ordinary server, and verify the signature with public key from the end entity certificate, thus finally confirm identity of the oridinary server.

The following are the rough steps to establish secure communication. They don’t reflect the real things in HTTPS, but provide the abstract frame. 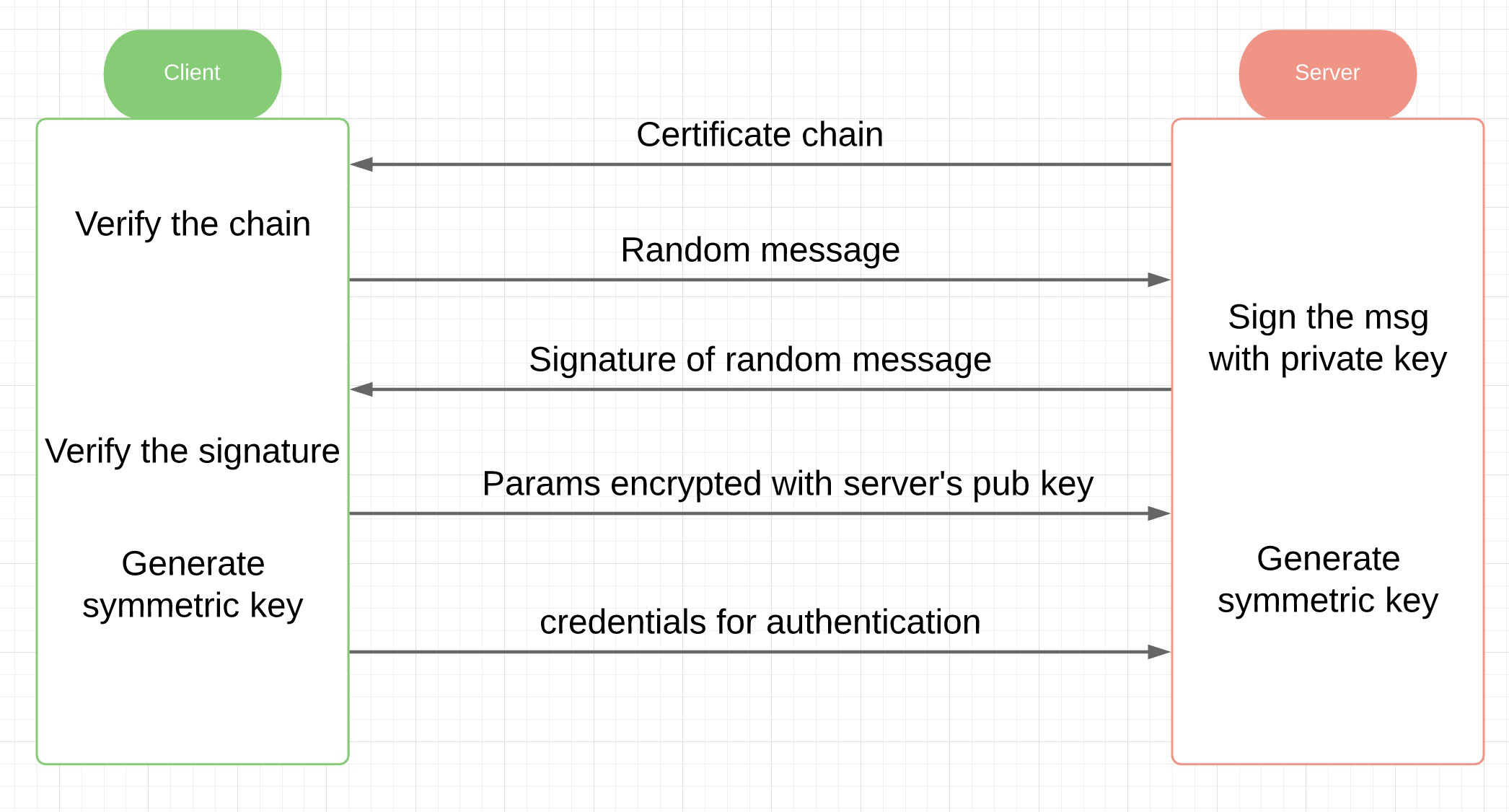 For security, we should only add end entity certificate to the asset resources, or other certificates issued by intermediate CAs would be trusted by our App.

Key exchange algorithms are to let A and B have shared secret key for symmetric encryption.

There are 2 kinds of key exchange algorithms: RSA based and Diffie-Hellman algorithm.

RSA based Key exchange algorithm is simpler, in which the client would generate the symmtric key by itsefl, then encrypt it with server’s public key and send it to server. 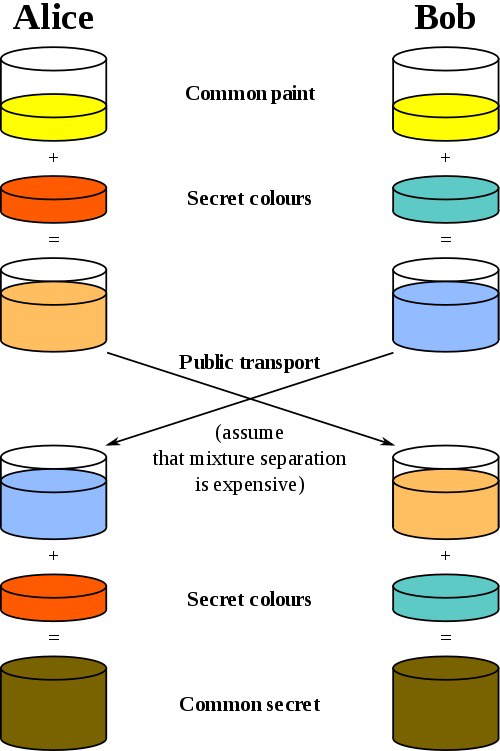 Therefore, in Diffie-Hellman algorithm, A and B could calculate the symmetric key respectively.

Original Diffie-Hellman algorithm is based on exponential modular. Assume is a prime and is a primitive root modulo and both of them are public. Private keys are random numbers and , public keys are and , and the secret key for symmectric encryption is .

In most programming languages, socket acts as API between Transport layer and Application layer. With TLS, a new abstract sublayer is added:

Although TLS is in the application layer, from the developer’s perspective it’s like a transport-layer protocol. 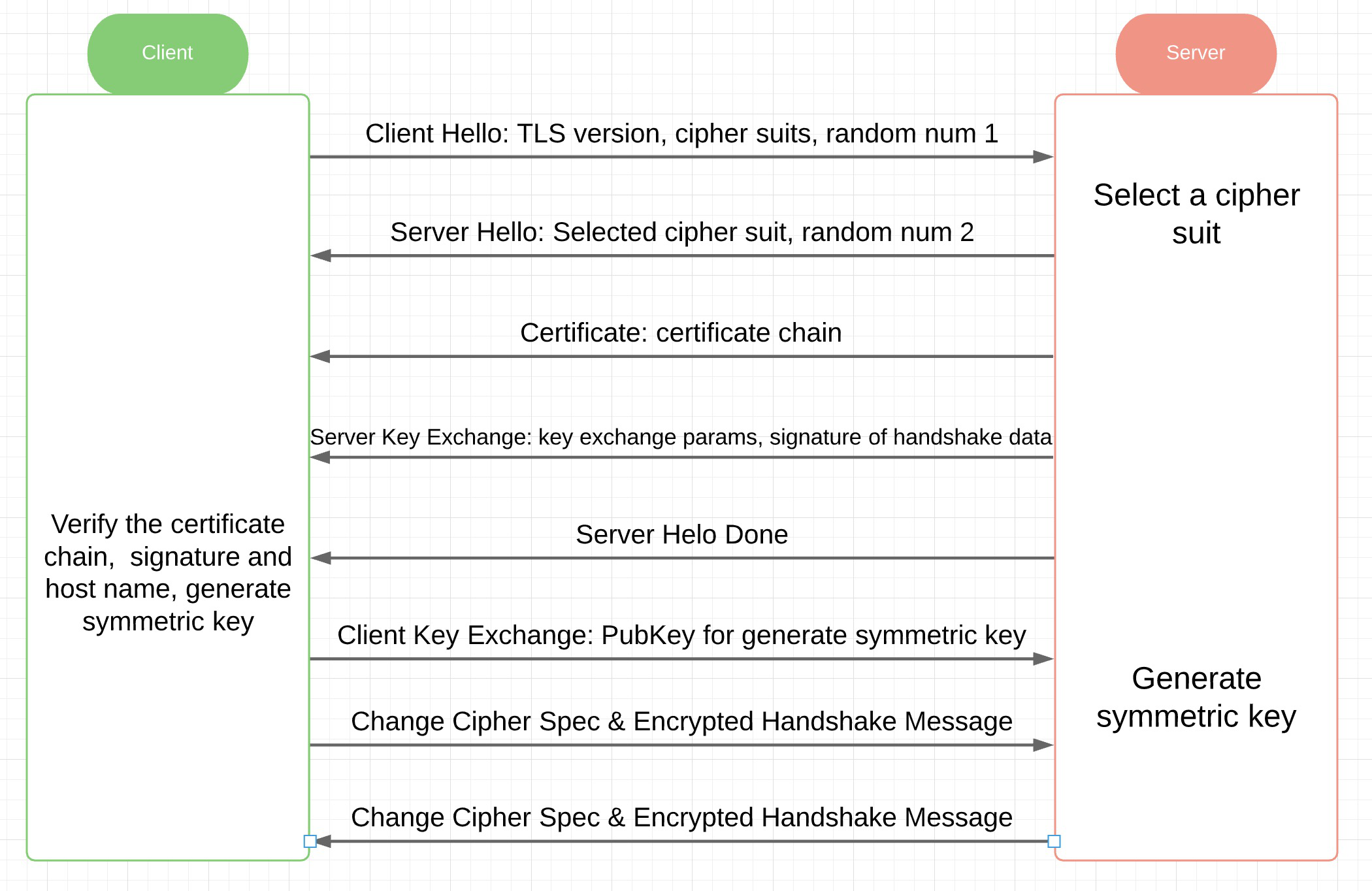 Contains all the cipher suits that the client could support, a random number. A cipher suit example is like the following: 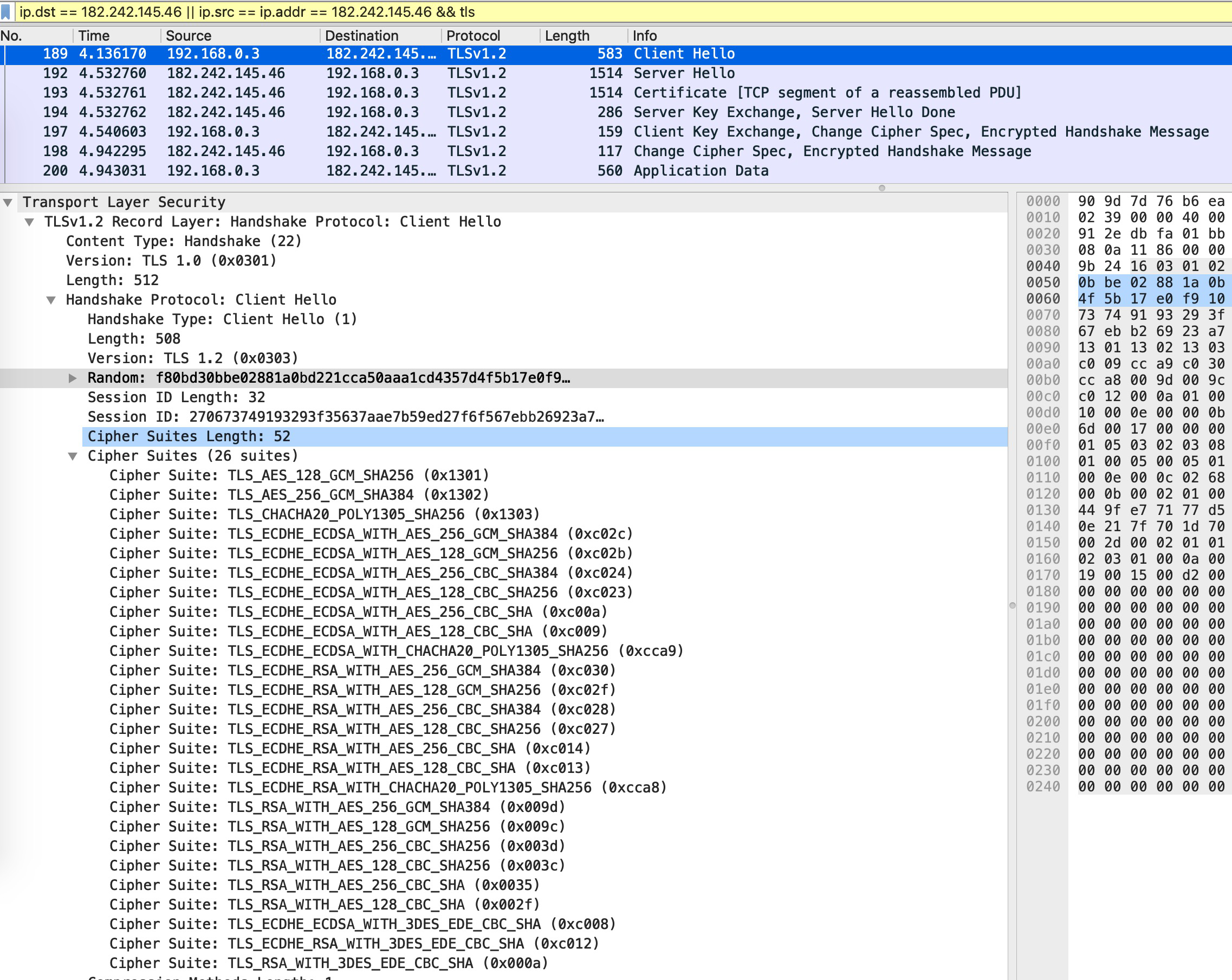 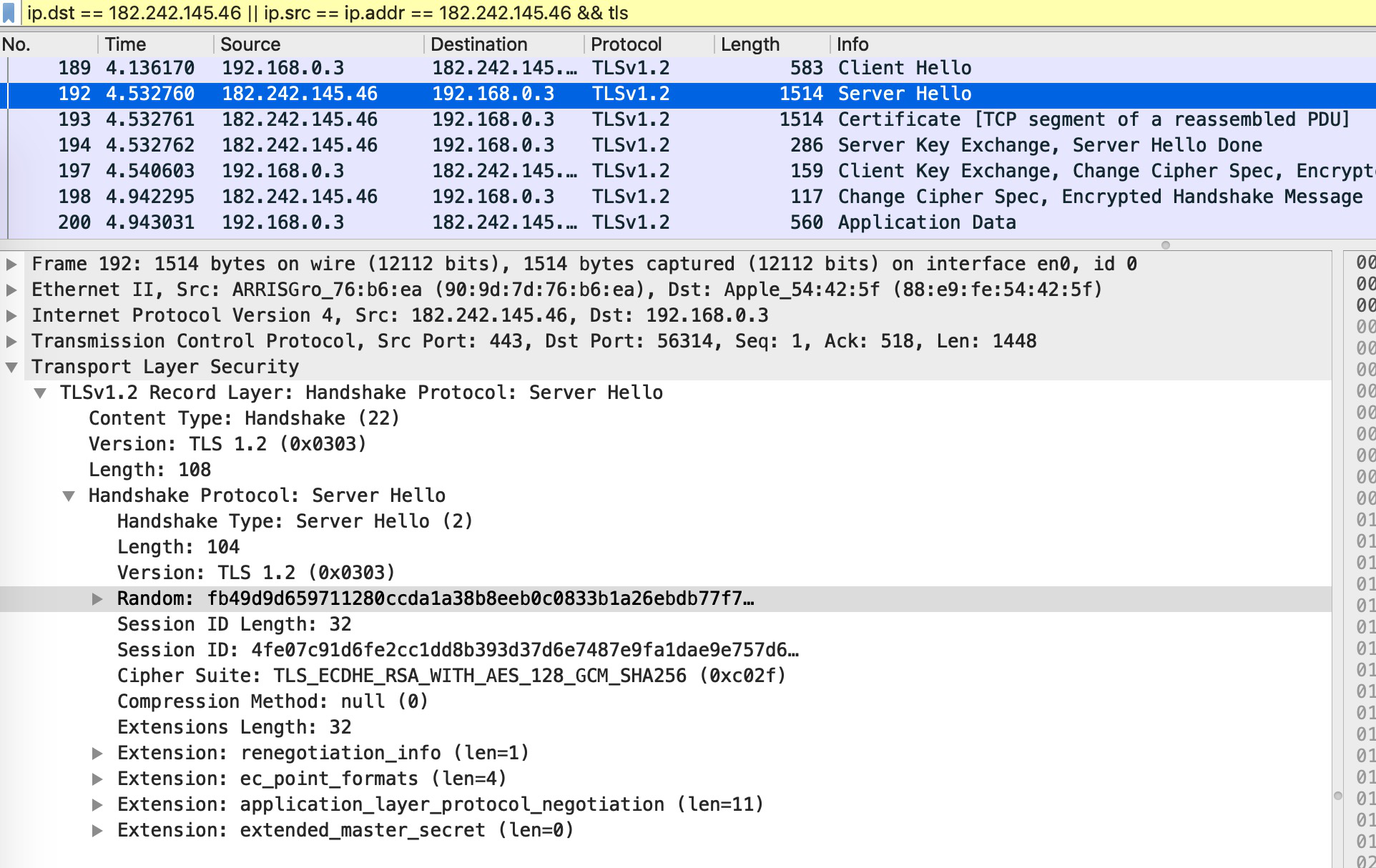 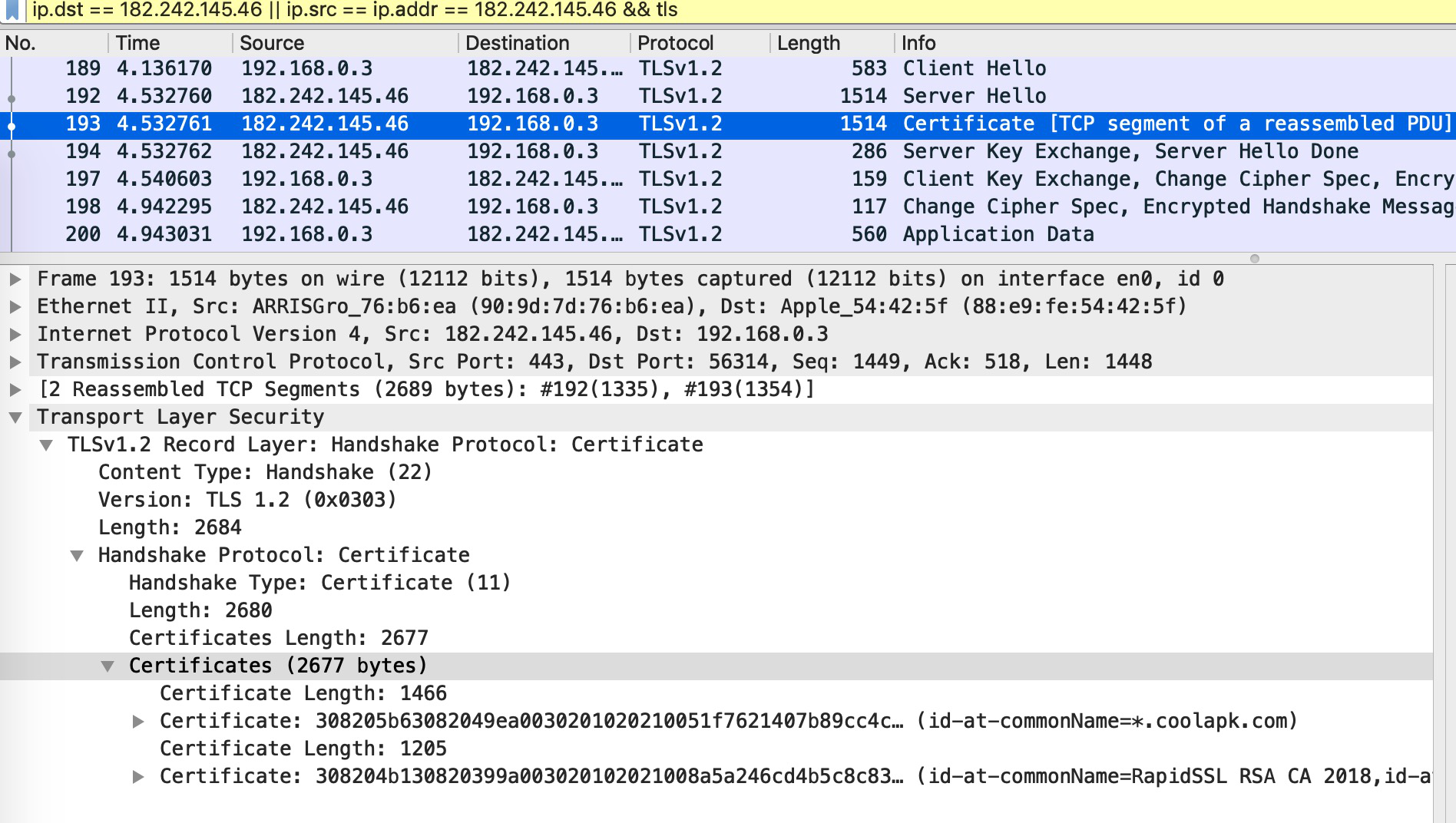 For ECDHE as key exchange algorithm, some necessary ECDH params are contained in this TLS packet. Another critical part is a signature of some important data so far transferred (including the random numbers and ECDH params). With this signature, the client would be able to identify the server. Note the signature algorithm should be consistent with asymmetric encryption algorithm of server certificate. 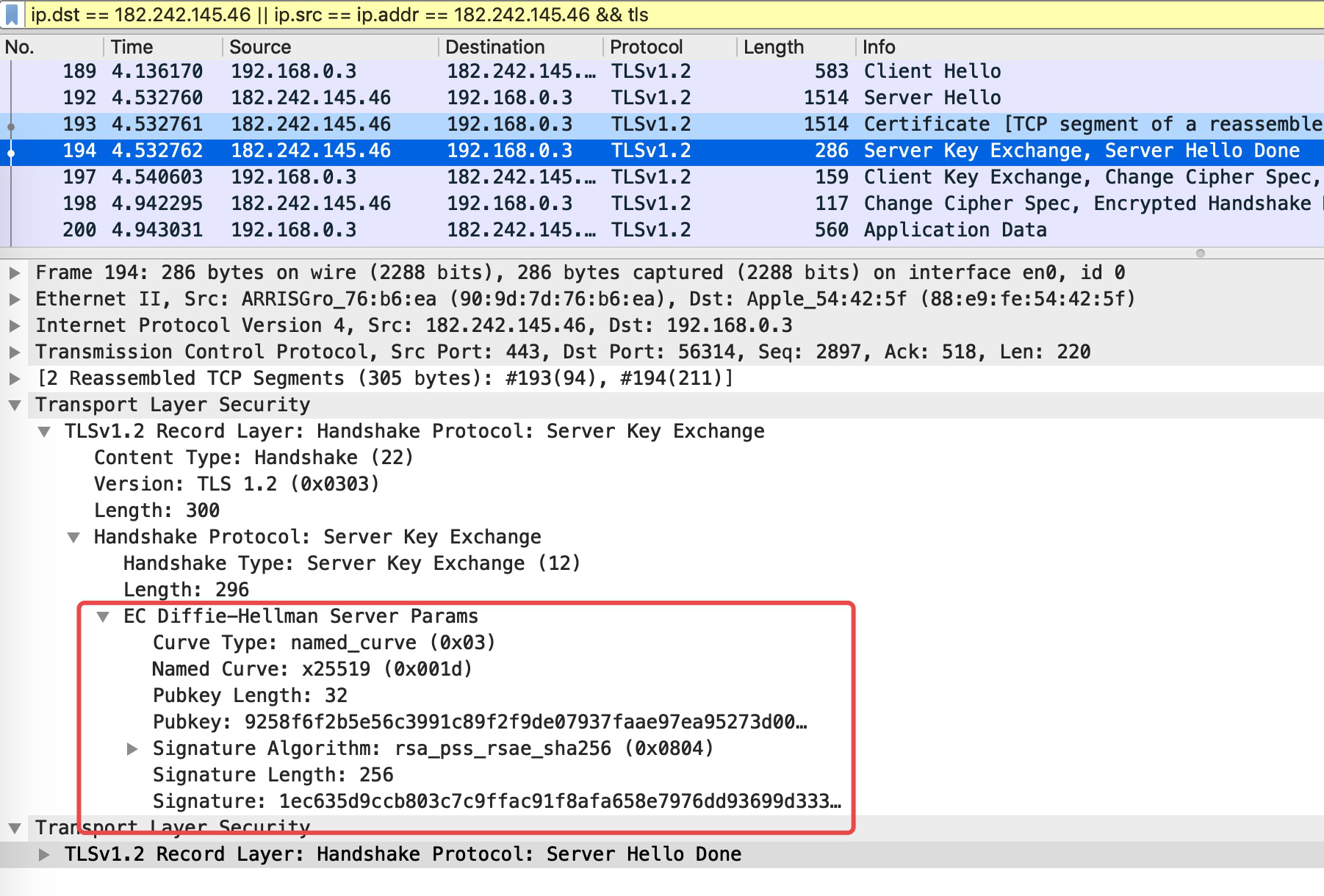 7. Change Cipher Spec (sent by both)

Trivial information, tell the other side I’m going to use symmtric key for the following communication.

8. Encrypted Handshake Message (sent by both)

Encrypted the handshake data with symmtric key and send to other side, act as verification.

After the above 8 steps, TLS handshake is over, A and B could securely communicate.